We covered the Pros of Illustration and the Cons of Illustration in our previous blog posts. In our third and final post, it’s time to see how an illustrative campaign is developed and the approach that we take to help our Clients get the best result. 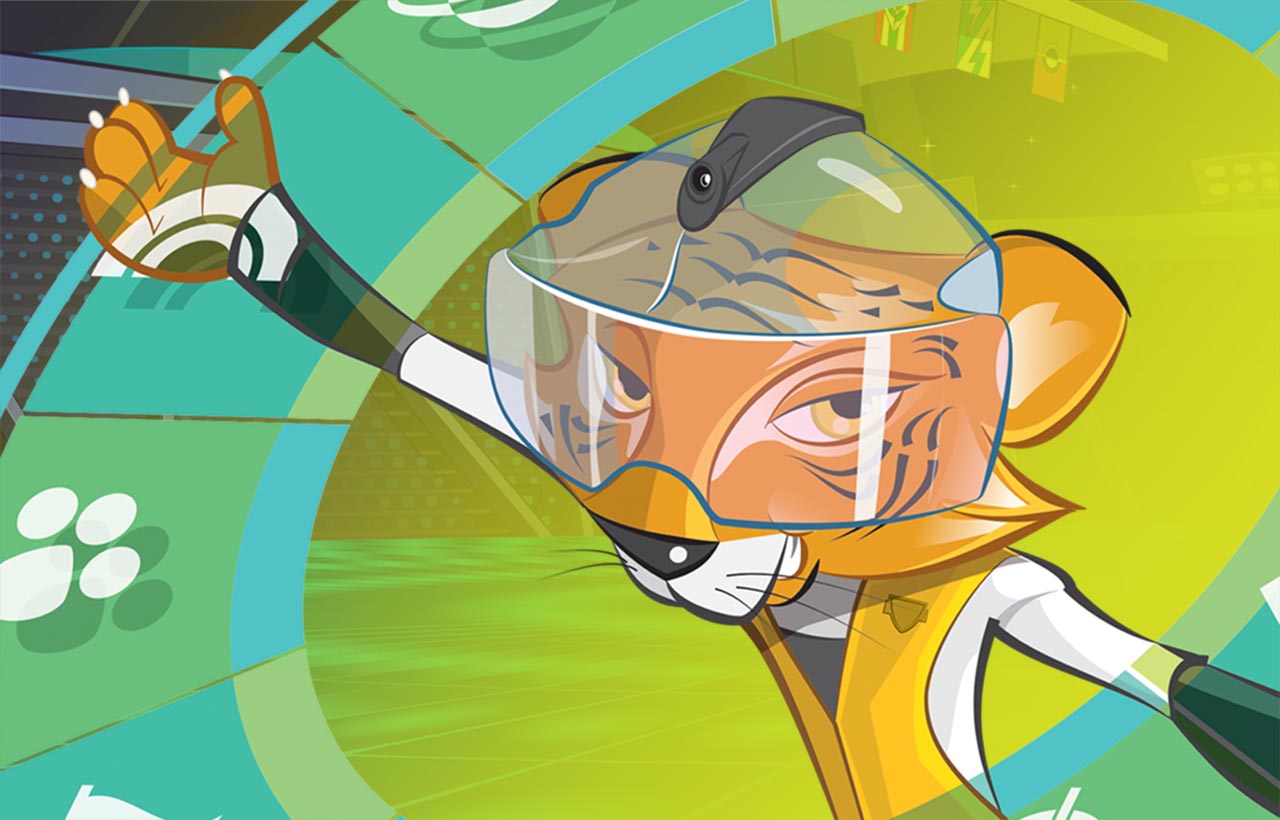 We have worked closely with the State Library of Queensland on the Summer Reading Club Campaign for many years. In 2017 the State Library chose the theme of ‘Game On’ with a focus on sports and games. The Client suggested a slightly different approach this year, focusing on animal characters rather than human characters (as per previous years). So with this brief it was time to start working. 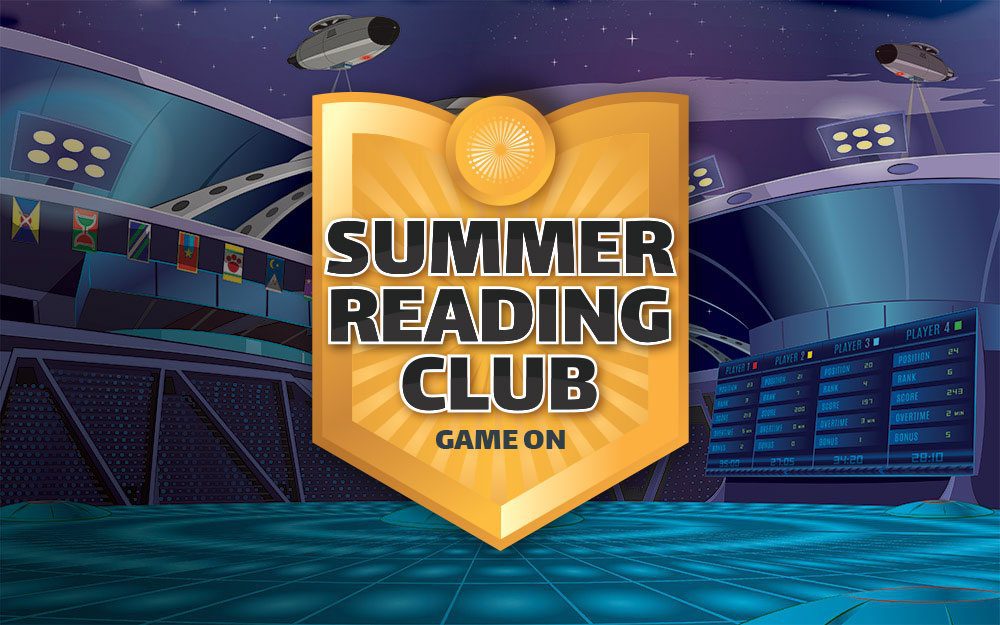 The first step for our team was developing a strong concept and artistic direction. Gathering a large amount of source material and inspiration and clearly defining key themes is an important part of the creative process. It also helps the articulate abstract ideas to key stakeholders. This helps the approval process and paves the way for a clear brief for the illustrator.

Choosing and Briefing an Illustrator

Once the State Library approved the creative direction, the next step was choosing an illustrator to work with. When working on a campaign of this nature, it’s important to choose an illustrator that not only has a style that matches the tone of your campaign, but also someone who is professional and is able to work within your deadlines. Always make the illustrator aware of your timelines so that they are aware of your schedule.

For the Summer Reading Club project we worked with Greg Jackson. Greg has a wide range of experience in illustration and has worked on many projects in publishing and the corporate world and with the Queensland Government. His style had the perfect amount of uniqueness and levity to appeal to kids. We clearly briefed Greg on the themes and source material of the campaign. It’s good to be clear but not too restrictive with your brief. Ideally you are approaching an illustrator for their expertise and advice, so it’s better to have a conversation and allow them to make suggestions and give feedback. Don’t forget you really want the illustrator’s style to influence the overall direction.

Once the illustrator has received the brief, the next step for them is producing sketches. This allows us to explore different ideas without spending too much time on one individual concept. These sketches are reviewed by the marketing team and supplied to the Client for feedback. At this stage more specific feedback should be given to the illustrator to help them make any necessary changes. 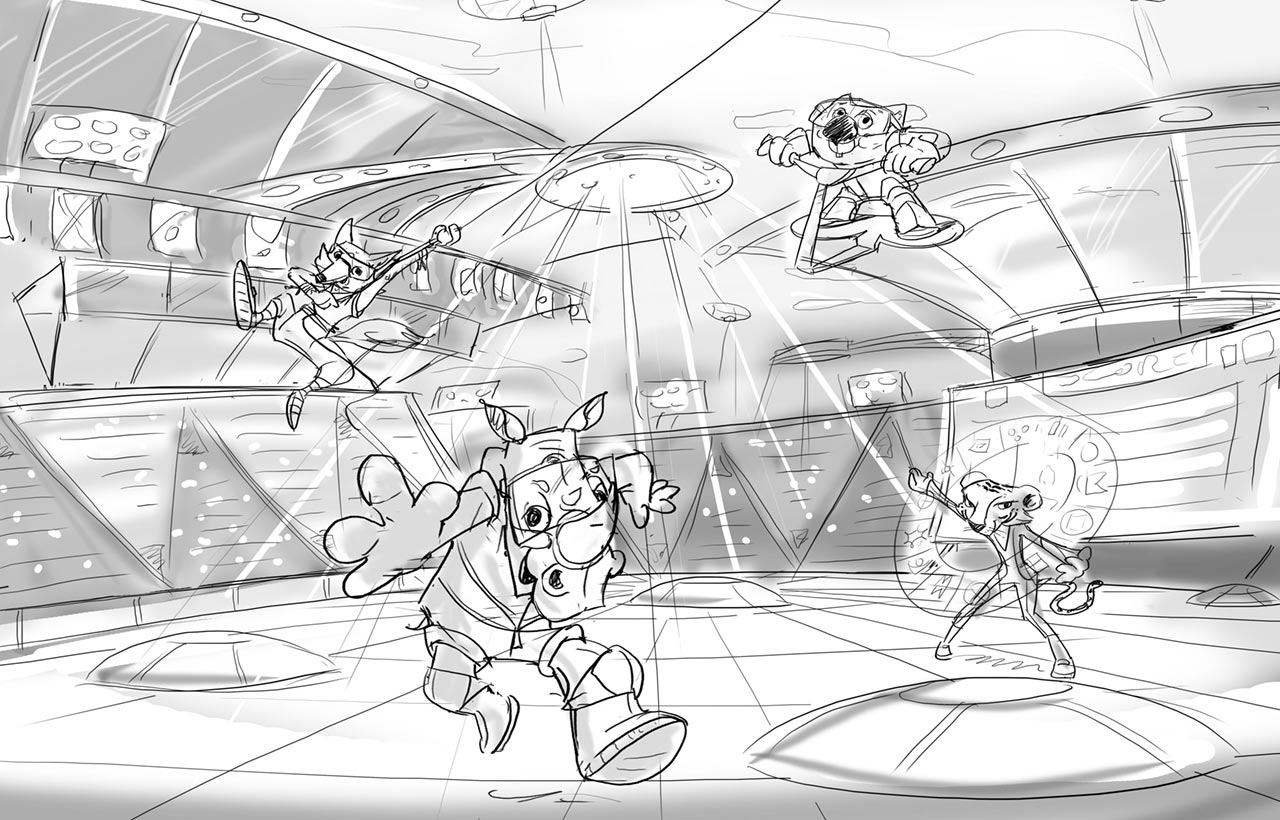 You can see from these original sketches that some details were modified for the final versions. Objects and characters were streamlined and changed to make the images more familiar and accessible to children within the target demographic. 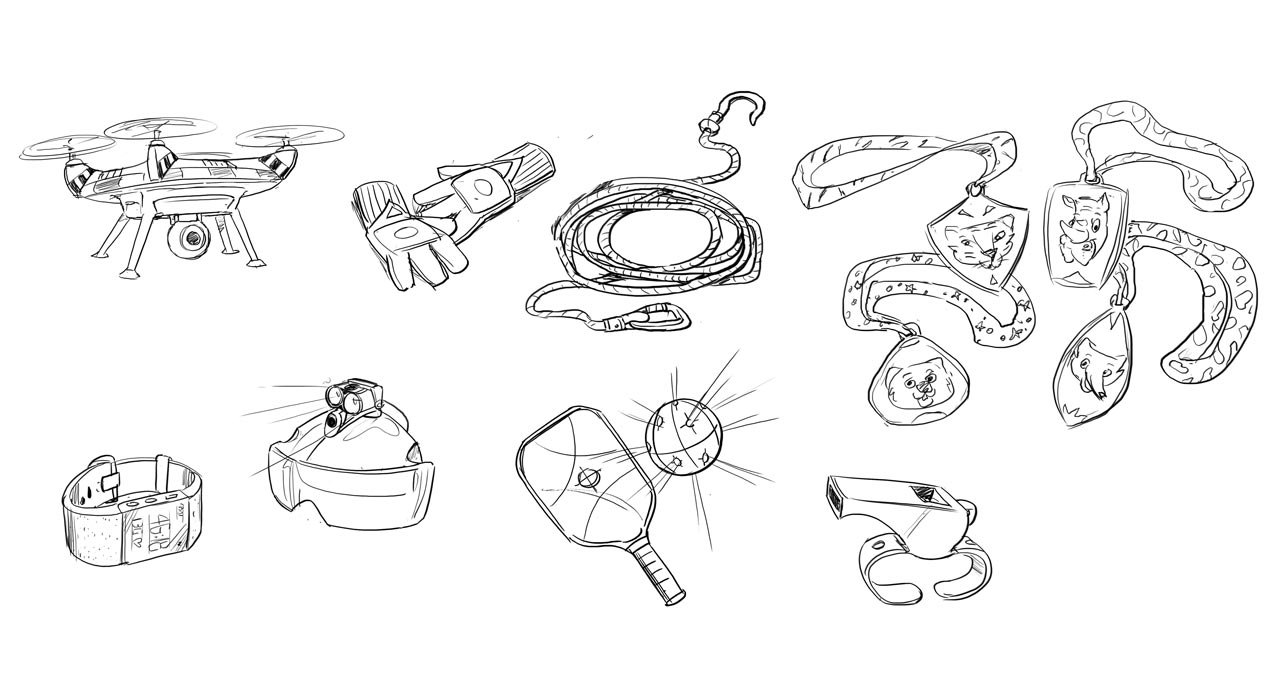 Some of the original sketches by Greg Jackson which were modified before final production.

Once the final feedback and sketches have been reviewed and approved, it’s time to move on to the final output. The final files were supplied to us by the illustrator and the design team began work on creating the final collateral. This year this included the Game On logo, posters, trading cards, bookmarks, stickers, website and much more. 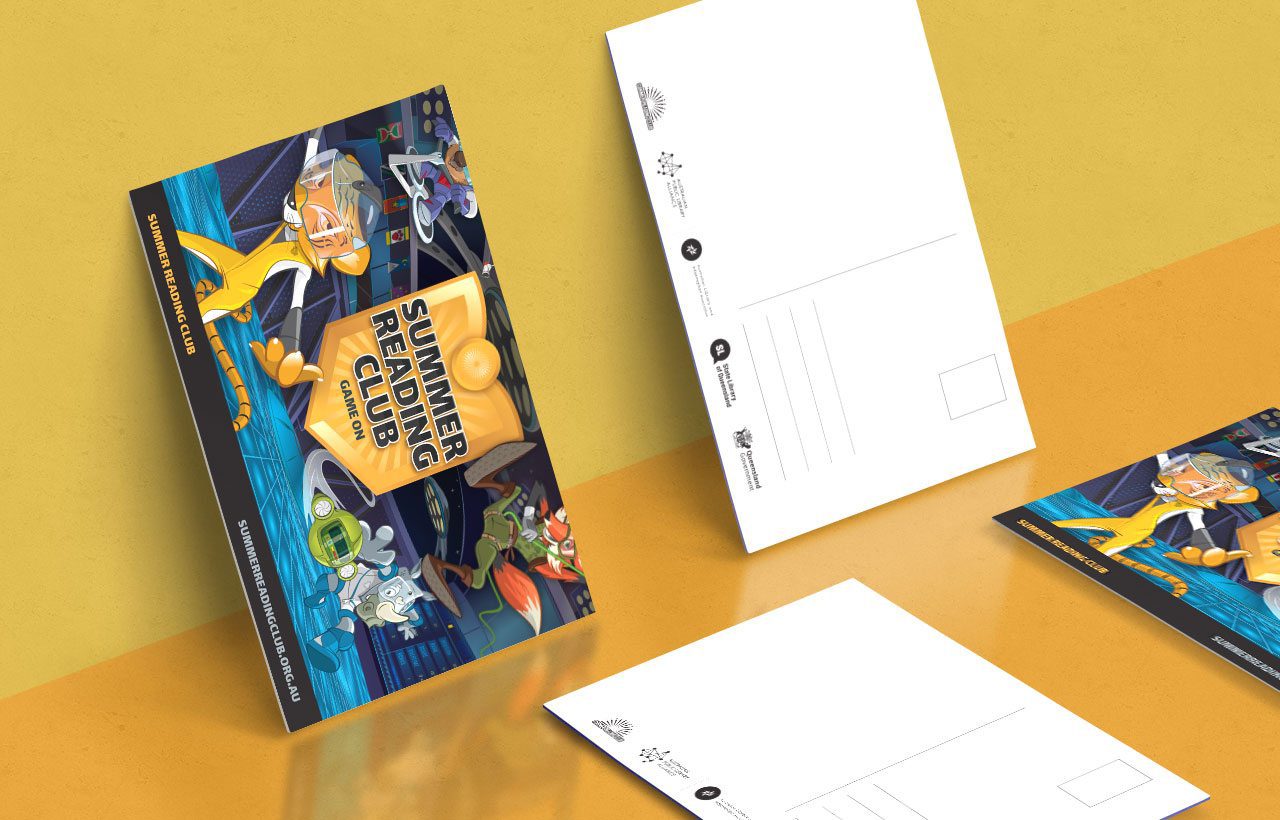 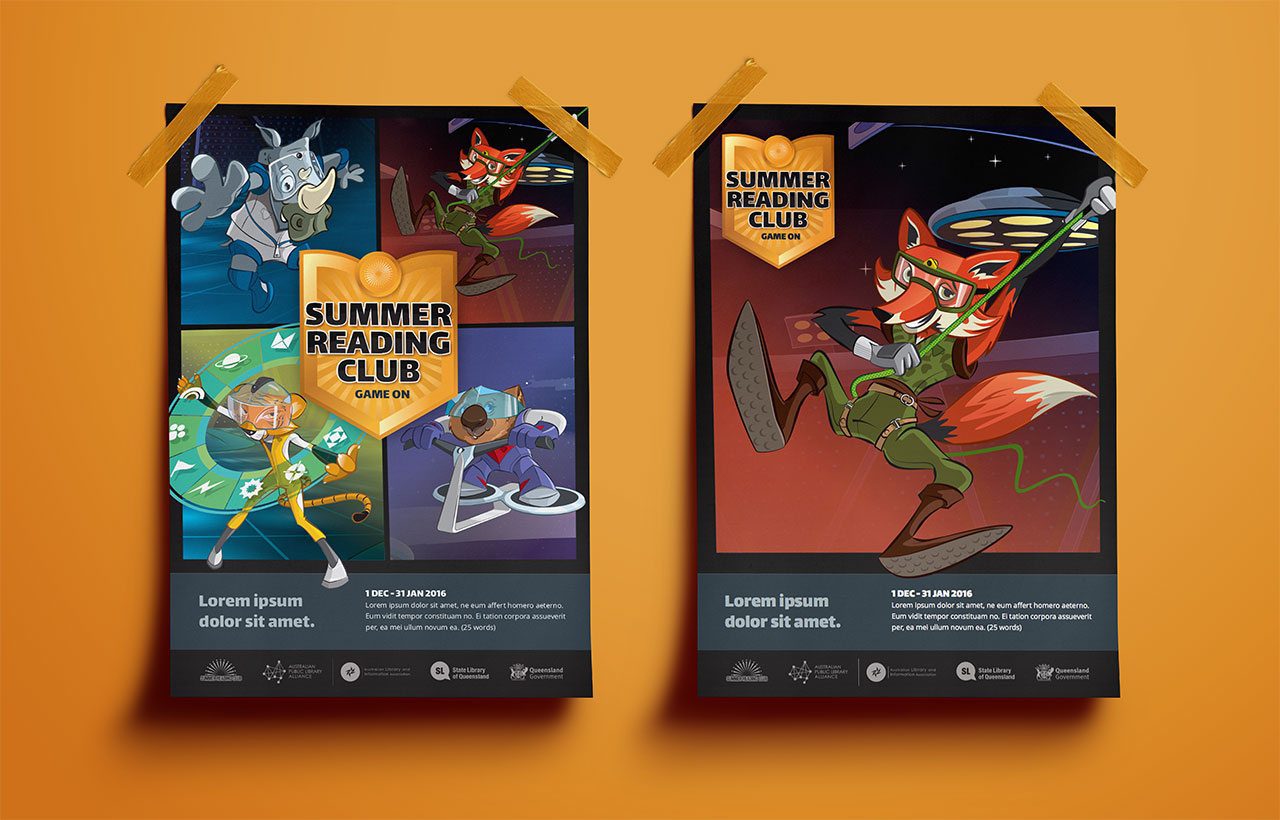 Greg provides the assets to us in a format that can be modified and structured by designers in the studio. This meant that a huge suite of items could be created at different sizes based on the needs of the client. It also meant that the client had access to files which could be used by their team and stakeholders. These images are used all over the country by different libraries in many creative ways, including decorations, colouring in sheets and on-site activities.

Some of the images from libraries around Australia participating in Summer Reading Club 2017.

It’s so rewarding to hear the great feedback on the Summer Reading Club from the State Library of Queensland, not to mention kids, parents and librarians nationwide.

Hopefully this insight into the collaborative process of an illustrative campaign can help fuel your own ideas and show that illustration can be a powerful visual tool which can resonate with your target market.

If you want help working on your brand or your next campaign please contact us. We would love to hear from you!

SHARE
PREVIOUS Augmented – the new reality
NEXT Part 1: Illustration in design – The Pros
This site uses cookies to provide you with a great user experience. By continue to use this site, you accept our use of cookies.AcceptPrivacy Policy